Much-loved Earlsdon deli and cafe Kendall's put up for sale 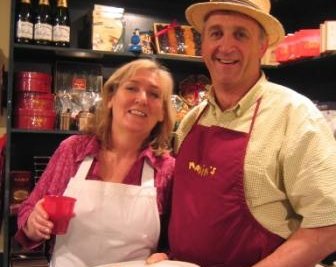 Much-loved Earlsdon deli and cafe Kendall's put up for sale

One of Coventry’s best-known delicatessens and cafes - Kendall’s of Earlsdon - has been put up for sale.

Husband and wife team Marcus and Theresa Kendall have decided to hang up their aprons after serving the local community for eight years.

The award-winning family-run business was founded by sister Jackie Kendall in 1999 and over the years it has grown to become one of the city’s most popular deli cafes.

The venue in Earlsdon Street has scooped numerous awards for its exceptional service, received rave reviews from national critics, and has expanded its offering to make it the perfect place to sample local produce which isn’t available in supermarkets.

But after eight years in charge, Marcus and Theresa have decided it is time to retire.

Theresa said: “Both of us will be getting our pension next year and we have decided it’s time for a change.

“It has been a very difficult decision for us. We have always loved running the business and we have never been so busy.

“But we were on holiday earlier this year and we had to ask ourselves, do we really want our lives to be so busy? I also have a second business and running both leaves us very little time for anything else.”

Marcus and Theresa were both trained with the UK Cheese and Charcuterie Guilds, all staff are trained coffee baristas and Kendall’s of Earlsdon has achieved Fair Trade status for many years.

“The ideal situation for us would be to sell the business as a going concern and for the staff to remain in place,” added Theresa.

“There has been so much work put into building the reputation of the business and it would be a fantastic investment for someone. It very much runs itself.

“When we took over the business it was 100 per cent a delicatessen, but we looked at the changing face of the high street and moved towards the cafe and takeaway side of the business. We have always listened to what our customers wanted, which is why it is such a successful business today.”